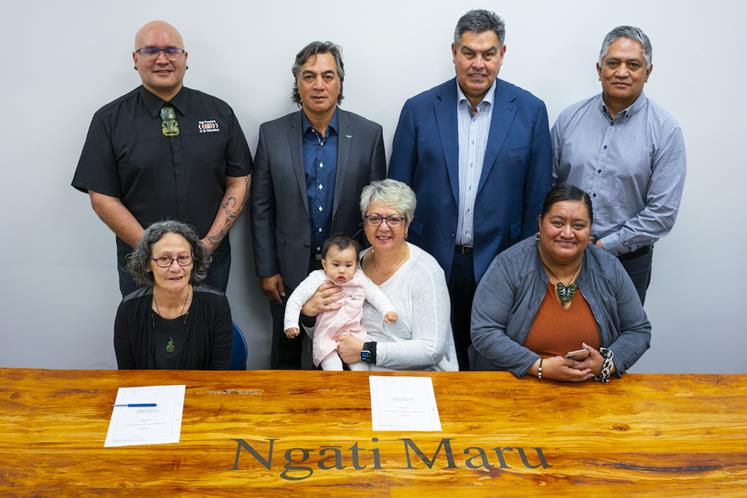 A special day for Ngāti Maru

Our Taranaki-based Trustees and Negotiators completed the initialling of our Deed of Settlement yesterday. This enables us to move forward to the ratification process where Ngāti Maru uri get to see the settlement in its entirety and vote on it.

Over the coming weeks we will be sharing the dates and venues of our Ratification Hui to be held in Waitara, New Plymouth, Auckland, Wellington and Taumaranui from mid-September.  We will also be looking at online alternative options so uri can attend also.

Below is more information about yesterday’s initialling and what it means for Ngāti Maru.
– Anaru Marshall, Ngāti Maru Lead Negotiator

Ngāti Maru set to vote on Treaty of Waitangi Settlement

Te Runanga o Ngāti Maru (Taranaki) Trust is a step closer to finalising its Treaty of Waitangi settlement claim with the Government.

Trustees of Ngāti Maru and the Minister of Treaty of Waitangi Negotiations Andrew Little initialed the Deed of Settlement this week.

This milestone signals the end of negotiations and the start of the ratification process – an iwi-wide voting process where adult registered members of Ngāti Maru vote on whether or not to approve the settlement package.

The deal, which will benefit about 3000 Ngāti Maru descendants, includes a Crown apology, completion of its $30 million financial redress, a cultural revitalisation fund, relationship agreements with Government agencies, and 16 cultural redress properties being returned to the iwi. This includes Tarata and Matau School properties, part of Tarata cemetery and sections of conservation land. Other significant properties include Te Wera Forest, three schools that are currently in operation and the Stratford Police Station will also be acquired and leased back to the Crown. This package will be managed by the iwi’s post-settlement governance entity Te Kāhui Maru.

“We are delighted to release the Deed to our people for consideration,” says Anaru. “Our whānau have waited over 20 years and we are now at a significant step, which can be ratified by uri before it becomes legislation.”

The iwi rohe (tribal area) of Ngāti Maru stretches from the eastern side of Mt Taranaki to the source of the Waitara River, across to the Heao Stream and down to the Whanganui River and back across the Matemateaonga Ranges to Stratford.

In 1865, the iwi had 220,000 hectares of land, the vast majority of this was illegally confiscated by the Crown or sold through dubious deals done without the permission of iwi members.

The Deed will be discussed with uri at Ratification Hui to be held in Waitara, New Plymouth, Auckland, Wellington and Taumaranui from mid-September. Alternative online options to engage uri are also being considered.

Ngāti Maru is the final iwi of Taranaki to complete its Treaty of Waitangi settlement. It is also part of the collective Taranaki Maunga negotiations.